The best poster award from ESEE 2021

Ing. Michaela Plevová received an award for the best poster for her contribution titled “Preparation of catalyst coated membrane for alkaline water electrolysis: influence of the substrate and preparation method”. This poster was presented at the 12th European Symposium on Electrochemical Engineering (ESEE 2021) organized by the WPEE (Working Party on Electrochemical Engineering at EFCE) in collaboration with Wetsus. The conference was held online on 14-17. June 2021. Ing. Martin Ďurovič won the award for the best poster at the Hydrogen Days 2021 conference, organized by the Czech Hydrogen Technology Platform. Due to ongoing measures against the spread of Covid-19, this conference was held online on 24-25 March. Martin succeeded with his poster "NiCoP cathode catalyst for electrochemical water splitting: Structural and electrochemical characterization". 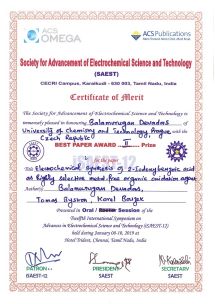 Even in this year our students did a great job. Ing. Karel Denk ("Capacitive deionization for drinking water desalination") and Ing. Jakub Rutrle ("Optimization and mathematical modeling of the laboratory alkaline water electrolyzer stack") has been awarded by Ivan Dlouhý prize for the best thesis in chemical technology with utillization of mathematical modelling.

Congratulations for both of you!

Thank you for great represantation of our department and congratulations!

One of the first alumnae of study programme "Hydrogen and membrane technologies" Ing. Michal Carda has been awarded with Ivan Dlouhý prize for his thesis entitled "An influence of selected phosphorus compounds on H3PO4-doped proton exchange membrane fuel cell operation" as the best thesis in chemical technology with utillizing mathematical modelling.

For the best thesis in chemical technology with utillizing mathematical modelling was this year awarded Ing. Tereza Jadrná with her thesis "Design and characterization of the alkaline water electrolyzer stack with anion selective polymer electrolyte".

Last week the Vice-Rector for Research and Development awarded 5 out of 23 registered young talented scientists for their outstanding work. Among the rewarded was our collegue Ing. Tomáš Bystroň, Ph.D., who recieved motiavtion aid for his research work. Congratulations for this important award!

Our postgraduate student Ing. Filip Karas recieved a significant Josef Hlávka award on 23. July 2015 in Lužany. This award is designated for the best students and alumnea from Prague public universities, technical university of Brno and young talented workers of Czech Academy of Science. He was awarded for his outstanding abilities and creative mind in his field of expertise.

Huge success acheived Ing. Roman Kodým, Ph.D., our assistant-professor. Among three other collegues he received on 23. July 2015 in Betlem Chapel the "Rector prize for the best young scientist in 2015". He was acknowledged foir his outstanding scientifical, educational and organizational results. 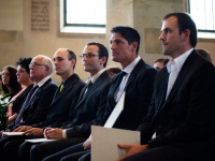 "Hydrogen Days 2015" - our students were awarded

Several of our students were awarded for their work during "Hydrogen Days 2015" conference which took place in Prague in March 2015.
The prize for the best student lecture won Ing. Jaromír Hnát and Ing. Martin Prokop for their lectures entitled "Properties of novel anion selective material with DABCO functional groups for alkaline water electrolysis" and "Kinetics of H3PO3 electrochemical oxidation on a bulk electrode" respectively.
Ing. Jakub Mališ managed to win the best student poster cathegory for his poster "Hydrogen permeability of selected perfluorinated sulphonated membranes in PEM water electrolysis".

Congratulations to all of you!

During the conference "Moderní trendy v anorganických technologiích 2014" again proved our students their excellent abilities. Two out of three best posters won our postgraduate students. Ing. Šárka Paušová for her poster "Preparation and photocatalytic activity of ZnCr-LDH" and Ing. Jakub Polonský for his work "Anodes for PEM water electrolyzers".

In April 2014 was held a conference "Hydrogen Days 2014" and three of our students were rewarded for their contributions:

Ing. Miloslav Lhotka, Ph.D. and his team received the best poster award for their contribution "Removal of Arsenic and Selenium with Rehydrated Clay Minerals".

Unipetrol prize 2010 received our student Ing. František Moulis for his thesis "Mathematical model of the annular flow microreactor for the high-temperature methane oxidation".

In this year received doc. Ing. Vladimír Mejta, CSc. the commemorative medal for his contributions in this field.

Minister of Education, Youth and Sports prize for science in 2008

This prize was awarded to prof. Dr. Ing. Karlu Bouzkovi for his scientific work in years 2000 - 2008 for his work regarding utillization of conductive polemers as catalytic support in low temperature fuel cells.

The best poster award was given by Czech Chemistry Society and Spolchemie a.s. to our bachelor student (3rd year) Jakub Mališ for his contribution "Operating conditions influence on PEM fuel cell characteristics".